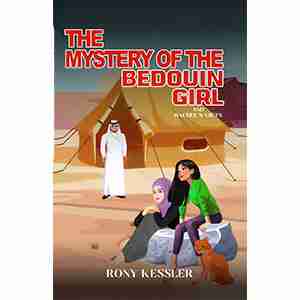 In Franklin Square resident, Rony Kessler’s latest novel, ‘The Mystery Of The Bedouin Girl,’ the main character, Rachel Glick is back again to help a friend who is in need. It is the third book in the series for the heroine, who was featured in Kessler’s earlier novels, “The Professor And The Wild Dogs” and “The Mysterious Animal Soup: And Rachel’s Gifts.”

Kessler, who is a native-born Israeli, said he came up with the idea for the books and the main character, Rachel, over twenty years ago when he was jotting down ideas on a napkin.
“I started writing a couple of chapters twenty years ago on a piece of napkin and I kind of lost track of them over the years,” said the 79-year-old Kessler. “I was in my apartment in Florida, in the early stages of the pandemic last year, when I found my writings in a pile of loose papers. I started writing, The Mysterious Animal Soup: And Rachel’s Gifts, and was able to finish it by the time I got back last summer.”
His latest novel takes place in the Sinai Peninsula, near Israel, where a 12-year-old Bedouin girl named Samira, struggles with a strict culture and hard way of life.
“Bedouin culture is one of the oldest cultures on the planet,” said Kessler. “There is a lot of pressure on their culture similar to what has happened to the American Indians of this country. There is the pressure of gentrification and on their territory, which they’ve roamed for thousands of years, being taken away. Some aspects of their culture are forbidden in other cultures, such as the men marrying multiple women and older men marrying very young girls.”
Click to READ MORE
X