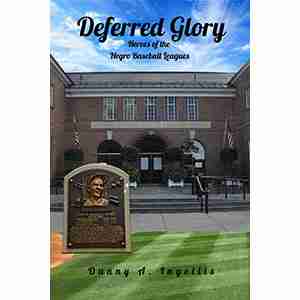 Deferred Glory: Heroes of the Baseball Negro Leagues is about the lives, struggles and desire of negroes to one day become professional baseball players in the Major Leagues. During this period of their lives, these players while playing in the Negro League endured tough traveling to ballparks in cities both in the South and North in order to play baseball.

They suffered through segregation mostly in the South both on and off the field. These men withstood horrible treatment because of their dreams to become Major League baseball players.

Eventually, these thirty-five players and executives were inducted into the National Baseball Hall of Fame in Cooperstown, New York. Unfortunately many were inducted posthumously.

“It took the Baseball Hall of Fame decades—and not a little prodding—to do right by some of the greatest and best-loved stars of the Negro Leagues. It took Danny Ingellis six months, as an homage to a friend. Buck O’Neil would be proud.”

“Deferred Glory: Heroes of the Negro Baseball Leagues is a home run! Travel back in time as author Dan Ingellis takes a close-up look of some of the men who played in the Negro Leagues, which provided talented athletes of color a place to play since they were not allowed to participate in the all-white Major Leagues until Jackie Robinson suited up for the Brooklyn Dodgers in 1947. Ingellis details the rampant racism and terrible living conditions the players had to endure. Deferred Glory is a terrific read for any avid baseball fan.”

“As America moves through another step in its tortured race history, no debut book could be more timely than Dan Ingellis’s, “Deferred Glory: Heroes of the Negro Baseball Leagues.” The lively collection of brief histories of some of the Negro League stars robbed by our National Pastime’s original sin of segregation is a primer on why the lives of men like Monte Irvin’s should be taught in Middle School classes across the land.”

“Now that Major League Baseball has recognized the Negro Leagues as major leagues, and is endeavoring to import the statistics of the many players who toiled there for decades, “Deferred Glory: Heroes of the Negro Baseball Leagues” is a timely and fresh look at the stories of the players who excelled in the Negro leagues. Readers will be introduced to those trailblazers who paved the way for so many that followed. Their abilities, personalities, perseverance, and love of the game, are reflected in this easy to read summary which will be appreciated by every baseball fan.”