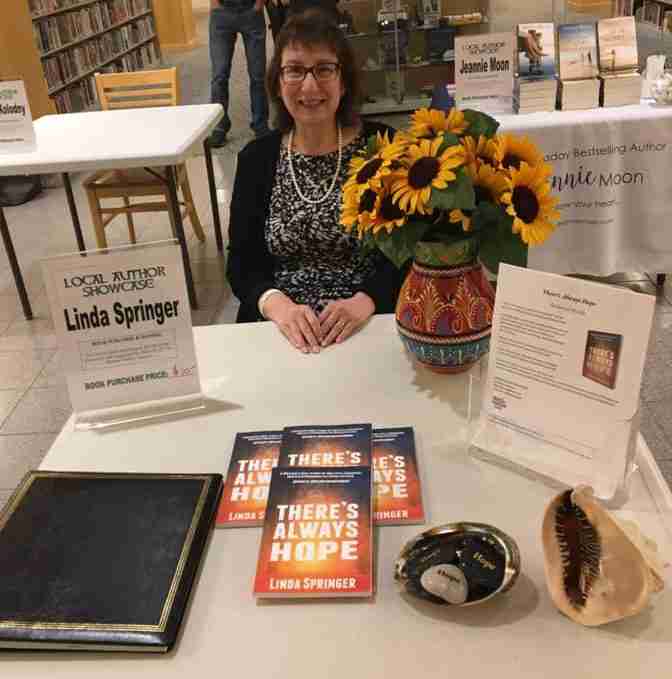 Linda Springer had a goal when she came to Red Penguin Books – she wanted to spread awareness. Several years ago, Linda’s son returned from college a very, very sick young man, and doctors were completely stymied as to the cause. He lost so much weight that he was only 84 pounds – and over 6 feet tall!

Finally, a doctor realized that it was an environmental issue and began treatment for electromagnetic sensitivity and multiple chemical sensitivities. In a nutshell, he was suddenly allergic to nearly everything!

Fortunately that doctors were able to treat him, and Linda’s son has been living a completely “normal” life for the past 10 years. More than anything, Linda wanted to be able to spread awareness of the odd disorder, as well as to offer hope to those suffering that relief came their way.

For years, Linda had been bottling all of this inside her, and whenever asked about how things were going, her response would be “You’ll read about it in the book!” After years of that canned response, Linda suddenly “discovered” Red Penguin Books from a friend, and placed that first phone call.

Since Linda’s book was not yet written, we were able to start right at the beginning – the book’s actual development – which is the ideal place to begin with a book project. It is ideal to plot the book’s course based upon the author’s goals, as the book can then be written and released in the best way to position it – and the author – for success.

We embarked upon a multi-step plan in order to achieve Linda’s goals of writing her story and bringing it to a wider audience.

We began the process by discussing the ending first – Linda’s goal of bringing wide exposure to this debilitating and yet unusual disorder. This initial meeting was to visualize the end result so that we could plan the best book possible to attain the desired results.

The goals we set forth at the outset were:

Our next planning meeting involved colored post-its, white boards and markers in many colors as we established a book outline, which I recreated in Google Docs so that Linda and I could share files as she worked, and I could comment and encourage her section by section instead of waiting until the very end.

Linda set to work crafting the book that would work best in our plan, as well as provide the insights and resources needed for the reader. The book came together quickly as we shared files and phone calls, and was edited and formatted as each section came to be finalized. In this way, we didn’t have to wait – and delay the book launch – at the end of the writing period, as the book was being edited all along.

While the book was in development, I crafted a pre-release game plan, and that included

As the book progressed, we also had the very important discussions of title and cover image as the book’s pieces came together, as the “look” of a book can often be the deciding factor in whether a person even picks up the book. We had definite deadlines as our pre-release strategy caused our schedule to fill with book launch events – and now all we needed was a book!

Upon release, Linda’s book “There’s Always Hope” shot to #1 in new releases. The book helped to put Linda “on the page” as an expert in her field, and by the time the cake was eaten from her first book launch party – held “on the air” with Stephanie while filming a show – she was invited to over 40 speaking engagements!

We at Red Penguin Books are thrilled to partner with people like Linda in bringing information and inspiration to a wider audience.