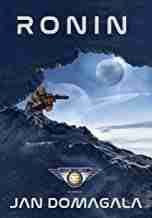 Jan Domagala was born in Staffordshire, England to a working class family where at school he discovered the joys of reading. Jan was a big fan of sci-fi books but would read almost anything he could get his hands on. His mother took him to join the local library as soon as he could read and from that day on, if it had words on it, he’d read it.

In the early 70’s there wasn’t much choice for employment where Jan lived so he ended up in an apprenticeship in screen printing for the ceramic industry. In the early years of his apprenticeship he had the pleasure of a trip on the schooner Captain Scott, a training ship as part of the crew. They sailed around Scotland and even up as far as Stornoway in the Outer Hebrides.

Jan is still in the same trade after a forty year career, but his passion is and has always been writing. After several abortive attempts, he started the Col Sec series, which is an action-adventure series set in the twenty fifth century.

Jan is currently working on the next book in the series.